This sweet dish is made on BHOGI festival the day before PONGAL in south of India.
Bhogi is celebrated by burning the old things which are no more in use and the next day is the harvest festival Pongal when new things are bought for the home. But, considering the current global warming it is clever not to burn but to bow and give to the needy people around.
POLI is also called as BOLI in some areas. It is made up of only Parupu Poli (Channa dal poli), Thengai Poli (Coconut poli), Masala Poli (carrots, beans, potato salty Poli).
Today i have made a combination of Thengai and Parupu Poli. 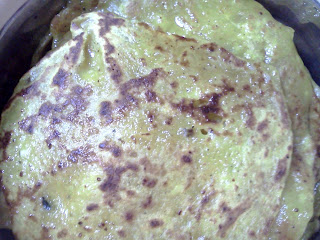 Method/Vidhiee:
1. Knead the maida by adding salt to it with water. Add Yellow food colour.
2. Make into a dough and add refined oil 1/2cup and knead well.
3. Cover it with a plastic sheet tightly.
4. In a mixer jar add coconut,jaggery,cardamom (pods broken and the flavour inside need to be added)
5. Meanwhile boil the channa dal to 3/4 consistency where you can mash them by a spoon.
6. Once the channa dal is done strain them and add to the mixie jar.
7. Grind them so that all the particles get broken down but, donot make them into paste.
8. Grind them corasely but not any pc that would hamper the process.
9. Now remove the sheet from the kneaded dough and mix the jaggery coconut mixture with it well.
10. Traditionaly the jaggery mixer is stuffed inside the dough by flattening them into a chappati, rolling them and again flattening them.
11. Here, i have used the method of mixing both the jaggery mixture and dough.
12. Now heat a tawa in a low flame.
13. Take one of the plastic sheet and grease them with oil.
14. Take a medium size ball of the mixed dough and flatten them with your hands or fingers on the sheet.
15. Starting from thinning the ends and then again flattening the centre to the end.
16. Be sure that the edges are thin as when you cook them they tend to turn thick.
17. Now gently take the flatten dough and put on to the pan.
18. Cook on both sides till light brown spots are seen.
19. Now add 1tps of ghee and cook on one side and another 1tps on other side.
20. Traditionaly the POLI floats in ghee when on tawa which is now immposible as the ghee prices are high and so to our health :)))
21. Hence, add ghee as per your wish. 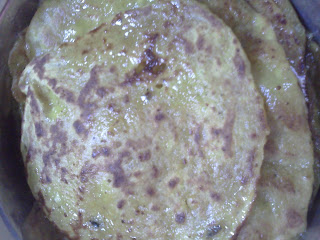 Serve hot with adding 1/2tps of ghee or white butter on top.