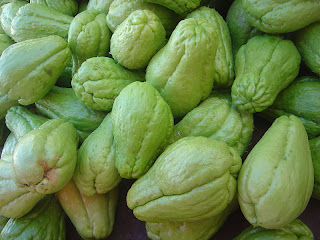 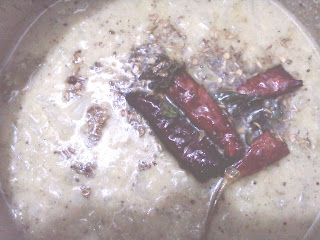 Method/Vidhiee:
1. Peel the skin of chou chou. Cut open them and take of the white part of the chou chou.
2. Cut them into small pcs. Do not finely chop them.
3. Slit the green chilly and finely chop ginger.
4. In a pressure cooker add the chou chou, green chilly, ginger, moong dhal .
5. In a mixer add jeera 2tbs,pepper cons, grated coconut and grind them into fine paste.
6. Once the pressure released from cooker open it add salt and the paste.
7. Boil them again for 2min by continously stirring.
8. In a small pan add coconut oil splutter mustard seeds, jeera, dry red chilly, asafatida and curry leaves.
9. Pour the coconut oil tadka on top of the kotu which is prepared. 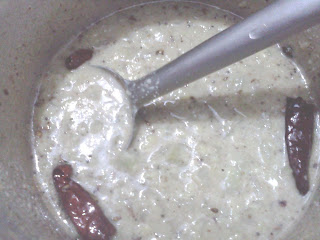 Serve with rice. Its the best source of fibre and its boiled so less amount of oil in them. Advised to be taken when you have cough and cold.
Posted by Arch at 1:53 AM